About
Johnson University is a place of uncommon community where students get ready for a fulfilling career and a meaningful life. Join us in Tennessee, Florida, or online!
Who We Are
History and Purpose
Quality Programs
Admission
Whether you're an incoming freshman, a transfer student, or a graduate student, this is the place to begin your application and join our community. Welcome to Johnson!
How To Apply
Financing Your Education
Experience Johnson
Academics
Learn about the various undergraduate and graduate degree programs offered at Johnson - more than 70 in all!
Degrees
Programs
Resources
Student Life
Johnson is more than a place where you receive a quality, affordable education - it's a community where classmates become friends, professors become mentors, and the campus becomes home.
The Fun Stuff
The Serious Stuff
Academic Calendars
Apply 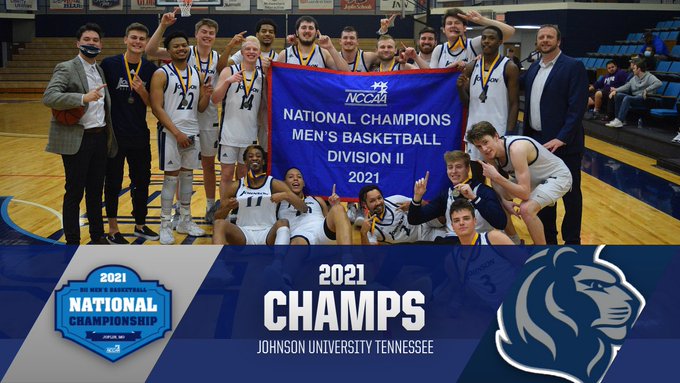 “Our guys worked so hard this year,” said coach Brandon Perry. “This has been a tough season with the pandemic and all that is going on in our world right now. There was so much uncertainty with our game schedule and practice times and our guys endured it and just kept finding a way to overcome. We knew we had something special with this group but you still have to go out and perform. The guys did that. I can’t be more proud of them and all the players who came before them and paved a way for us.”

The Royals were dominant in the championship game. Coby Jones led the Royals with 30 points and Miles Long added 22, while the Royals’ defense held a high-powered Arlington Baptist offense in check by forcing 21 turnovers in the contest.

In the National Semifinal game, the Royals defeated Kansas Christian College 92-67. Defense was the name of the game in the matchup, as the Royals held Kansas Christian to 9.5% shooting from deep and forced 18 turnovers. Johnson was well-balanced offensively as five Royals scored in double figures and 17 of Johnson’s 32 made shots were assisted.

The Royals survived a scare in the National Quarterfinals, hanging on to a 97-92 double overtime win over Manhattan Christian College. Johnson led for over 37 minutes of the contest and stretched the lead to 13 in regulation, but the Thunder would not go away. The Royals had a game-winning jumper rim out in regulation, and Jordan White of Manhattan Christian hit a 75-foot desperation heave in overtime to force a second extra period. Finally, in double overtime, Johnson took charge and pulled away for the win. Coby Jones had 38 in the win while Gavin Grubb and Orion Mashburn added 22 and 18 respectively.

Coby Jones, who was also named the tournament’s most outstanding player, was also named the 2021 NCCAA Pete Maravich Award winner, the highest honor given by the association. According to the NCCAA, the award “highlights excellence in competition, skill, academics, and Christian service” and is named for “Pistol Pete” Maravich, an NBA All-Star who was named one of the NBA’s 50 greatest players. Jones led the team as captain the last two years and is the third all-time leading scorer in JU men’s basketball. He’ll graduate this May with a degree in sport and fitness leadership.

“Coby has been an excellent ambassador for Christ, Johnson University, and the NCCAA during his collegiate career,” said Coach Perry. “He has consistently been one of the best NCCAA DII men’s basketball players while finding the time to volunteer at local nonprofits, achieve academic success, and prepare himself for his future.”

Jones is the third Pete Maravich Award winner from Johnson University in the last five years. In 2019, Taylor Gilpin won the award and in 2017 Gunner St. John was the winner.

“This is a great individual award, but it’s also a reflection of our entire team and the brotherhood we’ve built over the years,” Perry says. “I’m proud of every player who’s put on a JU uniform. We have something special here.”